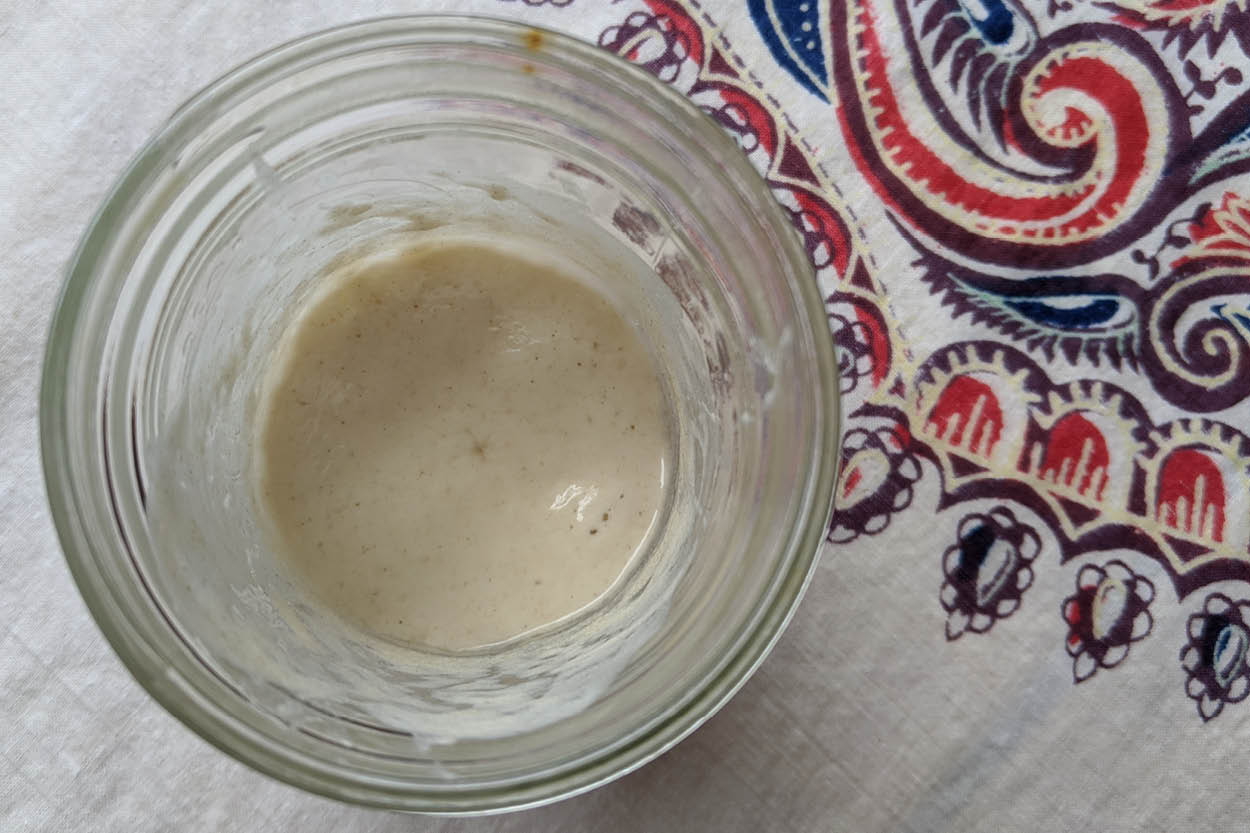 Hi friends. Sarah here – Sourdough Diaries, day number eight. I just wanted to update you about what happened with our sourdough starters yesterday. Now, I’m very surprised – I’m always surprised – that the one that I was about to give up on – the one that was very thin and I just fed and ignored it yesterday – is doing the best. So, it looks really great. I took pictures of the top view of all three of them again so that you can see what they look like. Now this one, the thinner one that was – it’s just really great. Starting to smell a little bit like a sourdough, which is – it goes past this like, flour smell and into almost like a fruity… almost like with a mild astringent like sourness to it. So this was very close and now it’s in the lead for winning amongst the three.

Now, my two twins here, the one with molasses and the one with just flour, they are still doing about the same as yesterday. Not a whole lot of change. I did stir all three of them once yesterday, I couldn’t help it. And so I’m just going to ignore these two since these have had attention every day, except for yesterday. I’m going to ignore them again today and see what happens. Maybe they just need one more day to really fully dig in there. Now with the sourdough starter that’s doing well I think it is well enough to feed and so I’m going to feed it just as we’ve seen before. So again, we’ll see you tomorrow. All things are well in the kingdom. Take care.

It’s still day 8 but it’s 12 hours later and I had to do another post because our starter, the one that was good and cooperative is looking so great – it is perfect, it is there, we are ready to make bread. So this is what it looks like now, it’s doubled in size, it peaked about here, and I kind of tipped it forward, but see look. Look at all those air bubbles, looks how – ah yeah, it’s so great, it’s like a sponge. Oops, it almost escaped. Now the update on the other ones, the ones that were not doing so great, and I totally ignored today – the molasses twin was doing about the same as this one. Not very exciting, not very promising. So I just gave the molasses one to my brother so don’t be mad at me. I’m going to probably just give this to compost because we already have a successful starter on our hands. I’m very pleased and very excited. So next up, sourdough bread.

So let’s talk a little bit about maintaining our starter. So let’s say you got your healthy starter, but you don’t have time to make anything with it right now. So that’s fine, so just feed it. And then you can put it in the fridge and you can let it stay there for a week or so, or whenever you’re ready to use it before then. And what we’ll do is we’ll just bring it to room temperature, and make a note of where it was and then how tall it’s going to rise. So we do like to catch it when it’s at its peak. So right before you use your sourdough starter in a recipe you want to make sure that it’s at least doubled in size. Even if it’s sunk down a little bit that’s okay you can still use it and again after we use it, like you use part of it for a recipe, we’ll have to feed it and bulk it up again. So it’s just a really easy thing to keep in your fridge. Sometimes I might forget to feed it after a week – it’s okay, but you’ll notice a separation that happens in the starter. So after a starter has been neglected somewhat in the fridge, there will be a lot of flour down to the bottom, and a liquid on the top that can be sometimes gray in color. That’s okay, it just means that the yeast is very hungry. So what I do if I pour off that gray water, and then I just feed it again. So I’ll divide it, add my fresh flower and freshwater, stir it up, and then I like to sometimes let it sit on the counter until I can see it start to activate again and then put in the fridge. So if you don’t make anything with your sourdough starter for a month then that’s fine but we’ll just have to feed it once a week at least. So, it’s very easy and I think though once you get into it you’re not going to want to stop.

I’m just going to finish this, let it sit on the counter because it’s good it’s a good thick texture, and then I will again let my lid rest on top without sealing it and then I’ll notice it gets all again and then I’ll be ready for you so excited to get started on this bread with you, so let’s go!

Effective July 24 Conner Prairie is adhering to the state of Indiana and City of Fishers mandate stating that masks be worn in public.