November is Native American Heritage Month, and we are honored to celebrate and amplify Native Americans in our community of the past, present, and future.

Through shared stories and unique programs, Conner Prairie provides learning experiences for every individual. This month, we explore the life, culture and experiences of Native Americans and how they have shaped Indiana’s history.

It is with gratitude to all people of Native American heritage that we celebrate this month.

Material culture — the objects produced, used and traded by a group of people — can help us learn more about them. Join Sara Schumacher, Curator of Native American History & Life at Conner Prairie, as we learn about the Lenape culture through discussions with interpreter Mike Pace and other members of the Delaware Tribe of Indians.

This is Problematic episodes to tune into:

Conner Prairie brings you the straight up facts of the history still affecting us today! We hold no punches getting to the core of the problems of the past and their ramifications. Come sit with us, and our guests, as we take a journey through problematic history!

Join Hannah and Easton for a discussion with Dr Liza Black about Native American Representation and Misrepresentations throughout American Culture and Media. This discussion spans the range of sports to film and includes recommendations for how to diversify your media consumption.

Join Hannah and Easton for a discussion with Sara Schumacher, Curator of Native American History and Life, about Mekinges. This discussion dives into the life and the story of William Conner's First wife and Lenape Indian Mekinges.

Why the Dogs and Wolves Fear Each Other

An animated narrative of the Lenape tale 'Why the Dogs and Wolves Fear Each Other,' original narration by Nora Thompson Dean, re-recorded narration by Mike Pace. A young dog wanders through the forest, and he enters a council held by the animals of the forest. A wolf speaks and asks who might fetch fire for warmth from the Lenape village nearby. The young dog agrees to go and is taken in by a nice Lenape girl. He then forgets to bring fire back to his friends, and the wolves have held a grudge ever since.

Why the Dogs and Wolves Fear Each Other

Step into Indiana territory in our earliest historical area, 1816 Lenape Indian Camp. Here you will explore the life, culture and relationship between the Lenape Indians and American fur traders.

Learn about the building that are sitting on the grounds in the lenape Indiana camp today.

Native American Heritage Month became official in the United States in 1990 after Congress and President George H. Bush signed a resolution that designated November as the first National American…

Mike Pace, who works at the Conner Prairie Lenape Indian Camp as a cultural liaison between his tribe and visitors, is a critical member of the staff. He is a member of the Delaware Tribe of Indians and is the great-grandson of Charles Elkhair, the last hereditary ceremonial chief of the Oklahoma Delaware. His mother was Thema Leona Elkhair Pace, a full-blood Delaware elder. At Conner Prairie, Mike shares his history and culture, educates the public, and works to eliminate stereotypes about Native Americans. He is knowledgeable about a wide variety of topics, from how to throw a tomahawk to the intricacies of beadwork and Delaware interactions with fur traders. He also speaks the original Delaware/Lenape language, Unami. Mike's family story remind visitors that all of Indiana land was once tribal land. It is important to acknowledge and understand that Conner Prairie sits on land that was once home to several tribes, including the Delaware/Lenape. We encourage you to visit the Lenape Indian Camp and to explore Indiana's Native American history on your next visit to Conner Prairie. 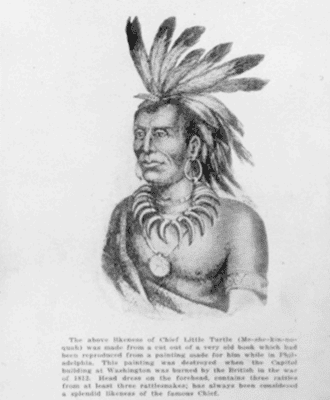 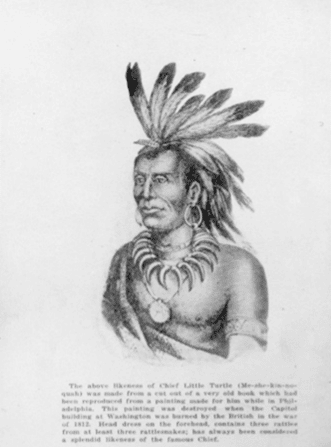 Little Turtle (Miami) fought for the land and the rights of not just the Miami peoples but all tribes in the Northwest Territory. He became known for intelligence, savvy battle strategies, and honoring of his promises amongst whites and Indigenous groups in what would become Ohio, Indiana, Illinois, and Michigan. His negotiations in during talks for the treaty of Greenville saved large portions of land for the Miami, Potawatomi, Wea, and others. After William Henry Harrison violated agreements under the treaty of Greenville with his treaty at Vincennes, Little Turtle reached out to President Jefferson and other American leaders to prevent another war. The secretary of war, however, disliked Little Turtle and his son-in-law William Wells, and prevented the President from reading his letter. Little Turtle continued to attempt to stem indigenous ire against the Americans, trying to limit the land ceded in treaties by tribes which were forcibly removed to Indiana. Little Turtle died on July 14th, 1812 near Fort Wayne, Indiana and was buried with full military honors. He was about sixty-five years old.

Images and Author Bio used with permissions from Kimmerer and her team.
LEARN MORE

Images and Author Bio used with permissions from Kimmerer and her team.

Robin Wall Kimmerer (Potawatomi) is an author, scientist, decorated professor, and an enrolled member of the Citizen Potawatomi Nation (Kimmerer, Robin Wall). Her books Braiding Sweetgrass and Gathering Moss, are excellent works which encourage readers to connect with their environment in a very personal way (Kimmerer 2013). Kimmerer describes how her upbringing does not infringe on scientific learning but expands her understanding of the flora she studies. A 2022 MacArthur Fellow and SUNY Distinguished Teaching Professor of Environmental Biology, Kimmerer is a founder and director of the Center for Native Peoples and the Environment in Syracuse, New York. Interested readers can purchase her book or learn more about the author through her website: https://www.robinwallkimmerer.com/ or visit Braiding Sweetgrass | Milkweed Editions.

Wanting to discover more about Native American Stories? View the sources below:

This project was made possible in part by the Institute of Museum and Library Services 45.312