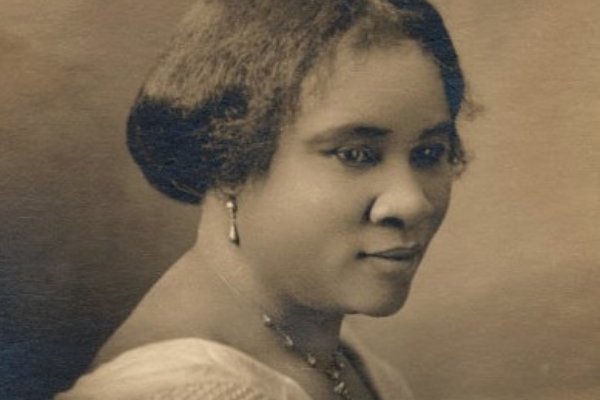 “I had to make my own living and my own opportunity. But I made it! Don’t sit down and wait for the opportunities to come. Get up and make them.” Madam C.J. Walker

Earlier this year, Netflix released a miniseries about the life of Madam C.J. Walker, a female entrepreneur who built her beauty empire in Indianapolis. Walker, who suffered from a scalp disorder, created a homemade line of women’s hair care products specifically for African American women.

In 1910, Walker relocated her growing business from the Pittsburgh area to Indianapolis and opened the Madam C.J. Walker Manufacturing Company. Not only did she overcome adversity as a black person, but as a woman in business, Walker shattered glass ceilings as she went on to become the first black female self-made millionaire as recorded in the Guinness Book of World Records.

Now designated as a National Historic Landmark, the Madam C.J. Walker Building still stands in downtown Indianapolis on Indiana Avenue, serving as a reminder of her accomplishments. You can even step into the story of Madam C.J. Walker by visiting a new exhibit at the Indiana Historical Society called, “You Are There 1915.” For more information and to plan your trip, click here.

The Origins of Black History Month

Walker’s story is just one of the many history makers that we recognize during February in honor of Black History Month.  The origins of celebrating Black History month in February are connected to the birthdates of two specific leaders who played a significant role in the movement towards racial equality in America: U.S. President Abraham Lincoln, born on February 12, 1809, an issuer of the Emancipation Proclamation. And Frederick Douglass, an African American abolitionist, author, and orator, born on February 14, 1818. With the birthdays of these two men only days apart, it only felt natural that the month of February be selected.

In February of 1926, American historian Carter G. Woodson, founder of the Association for the Study of Negro Life and History (now the Association for the Study of African American Life and History, or the ASALH), launched Negro History Week in an effort to shed light on and celebrate an otherwise underrepresented understanding of culture, history and accomplishments among the black community. As early as the 1940’s, this single week’s observance was lengthened to the span of a month, Negro History Month. By 1976, a widespread recognition of February as Black History Month was enacted by U.S. President Gerald Ford who urged all Americans to participate in its observance.

This month, we honor the black men and women who have helped shape our country by discovering the history of leaders, lawmakers, and innovators like Madame C.J. Walker, Rosa Parks, John Lewis, Martin Luther King Jr and many others. Below, our team has compiled a list of books, movies, and podcasts that we recommend to help ignite your curiosity and explore the stories behind these history makers.**

**All contributions and recommendations expressed by Conner Prairie staff.

Save the Date! The Headless Horseman Festival is back!